stylus
A project by Ann Hamilton

The Pulitzer Foundation for the Arts

Stylus: A Project by Ann Hamilton [with Shahrokh Yadegari]

Ann Hamilton’s Stylus installation at The Pulitzer Foundation for the Arts in St. Louis was conceived as both sanctuary and laboratory–an attempt to link “the building’s interior state of reflection and contemplation to the world outside its opaque walls.” Employing such elements as the silence of a waving hand, the vibratory clicking of thousands of Mexican jumping beans and a set of speakers telling stories to the sky, the Stylus project transformed the Pulitzer space into a unique audio and visual environment. Hamilton’s haunted call and response responded directly to the Tadao Ando-designed building, animated by acoustic elements developed in collaboration with composer and sound designer Shahrokh Yadegari. This volume both documents and builds upon the installation with texts by the artist, exhibition curator Matthias Waschek and Steven Henry Madoff, photographs of the exhibition and an image-based inventory of the artist’s materials and process.


The Design
I used sound as an abstract medium for touch to express and implement the core ideas of
Stylus in the aural domain. Stylus to me is a poetic expression of contact. The formation and communication of the ideas came to me from Ann Hamilton in the same way, in poetic lines. I designed the sound world to engulf the audience interactively. Five speakers located at the top of the building played back to the community a catalog of voice messages which were collected during the life of the exhibition. A Disklavier player piano situated at the farthest location to the entrance of the building announced the arrival of every audience who signed in by translating their signature into strong and undulating waves of tones on the piano. Audiences could choose records collected from the local St. Louis Library archives on two record players in the entrance area. Just above, on the mezzanine, the sounds of the jumping beans on the steel tables were amplified and played back bouncing against the windows, creating a serene but alive world. As the audience walked up they were visually remind of the inevitable by the upside-down hanging taxidermy birds underneath the table. The sounds of the beans are delicate, as their beings are, and I wanted the mezzanine feel like a sacred place of life. The only processing was playing back the sounds with delays and at times routing the sounds of the jumping beans to the galleries.

The speakers of the multi-channel sound system were strategically planted in the cavities already setup on the flour on the mezzanine, the main galleries, and in the two square galleries, to activate the unique acoustics of Ando’s building and to create a sea of changing and moving sound worlds, without the audience being able to pinpoint the location of any specific speaker.  The meditations of the audience on balancing the rolling steel balls at the Steel Table created a sound movement in front of the Ellsworth Kelly’s “Blue Black”. We placed two Yamaha Disklavier pianos in the middle of the two Galleries at the far end of the building and linked the acoustic world of the two square galleries. Other than the the fact that people in the two galleries could hear each other in the other gallery, one could play melodic phrases on the piano in the upper and the computer played back algorithmically generated rhythmical accompaniment played on the other.

The aural elements of Stylus are separated in three distinct components:

1) Music composition and Sound Design – I used the delicate yet powerful operatic voice of Elizabeth Zharoff in a composition using Lila (a computer music instrument which I have designed using basic analog principles such as delays, loops, and modulations), to convey the human aspect of Stylus. The composition is in structured improvisation form for which I gave Elizabeth theatrical and narrative directions. During the recording I played Lila, controlling what she heard of her immediate past as well as prepared segments. By accompanying her I was able to direct her musically. Later I sculpted the piece into an 8channel piece.

The poetry readings of Ann Hamilton was the other element of the human voice in this design. Multiple layers of vocals by Zharoff and Hamilton were spatialized on top of a mix of other sounds chosen from a recorded catalog through a controlled random process during the life of the exhibition. These sound layers created a context for the human voices to express the ephemeral moment when a contact is made. The human voice became the aural stylus in Stylus.

A multi-layer “8 channel player” with a spatializer diffused the many layers of sound in the space. I used a database of sound recordings in the following categories:

The “8 channel multi-layer player” includes a finite state driver system by which multiple mix configurations of the database of the catalog are defined. In each state the level of the mix and the speed and format of the movement of the sounds in the space are specified to create different emotional expressions. A clocking mechanism stepped through the different states by controlled random processes. We animated the space at every hour and half hour (synchronized to the clock, e.g., 1pm, 1:30pm, 2pm, etc.) by randomly playing a single sound on all the speakers with different delay time assigned to each speaker.

2) The sound system – I along with my assistant Toby Jaguar Algya designed a 24 channel sound diffusion system with a central control mechanism to turn the Tadao Ando’s building for the Pulitzer Foundation in the Arts, into an interactive aural instrument. This system was designed not only for Stylus, but also to stay as for the future of the building. All the speakers, sensors, pianos, and microphones were connected to a single Mac Pro Tower computer. The speakers were composed of 20 Meyer Sound MM-4 speakers (in the cavities in the floors in the galleries and Mezzanine), 2 MM-10XO subwoofers (mounted high on the walls of the main gallery), and 5 bell speakers (using an stereo feed) mounted on top of the building. An RME HDSPe Ray DAT cards was used as an audio interface. 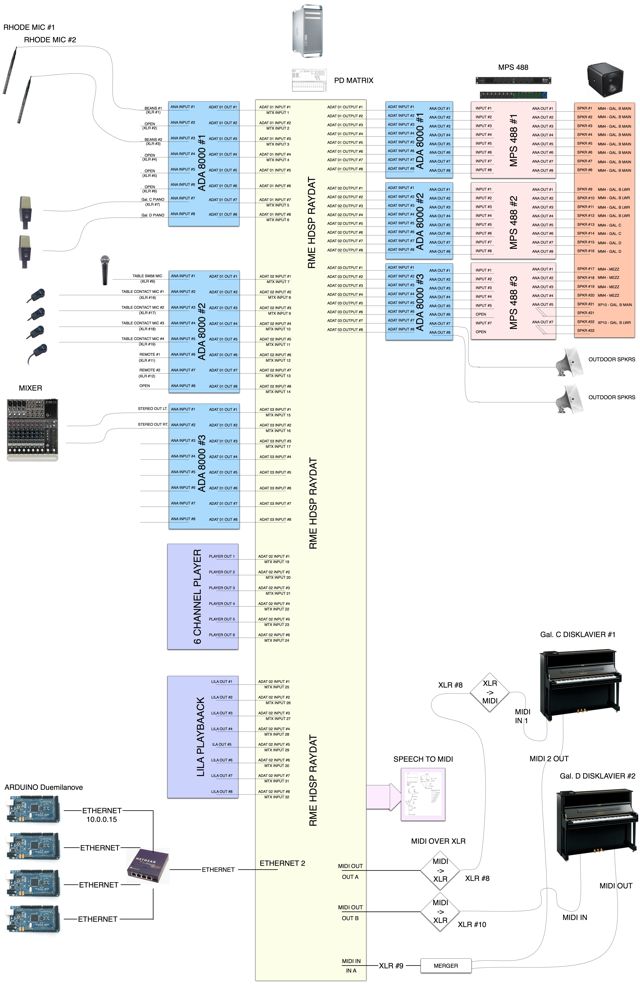 3) Software Control – This part of the system was composed of multiple software subsystems, as follows:

-an interactive instrument (called Lila) based on old analog paradigms such as delays, loops, and modulations (LILA)

-a 32×32 delay matrix (designed by the Assistant Sound Designer Toby Algya) provided the capability to route all the mic inputs and sounds from the 8-channel PLAYER, and LILA to all the speakers throughout the building. The delay matrix allowed the flexibility to localize sounds at any specific location by choosing delay values for each speaker, and thus, making the system useful as a flexible playback mechanism for amplification/reinforcement of live performances as well.

-a control system for capturing sensor and Disklavier inputs, and translating such data into algorithmic music on the pianos or timed control of the audio playback systems.

We used multiple instances of Pure Data (Pd) and Max/MSP system to implement the above design.

Designed by Shahrokh Yadegari and integrated into the architectural space, the 24 channel sound system for stylus was conceived to respond to the building and left in place for future programs.   Running from a central Mac Tower, the system ran a 32-by-32 point assignable matrix of input and output devices for live signal processing: the audio signal passed from the computer via the RME HDSPe Ray DAT card through the Behringer ADA-8000 to the Meyter MPS-488s and into 20 Meyer MM-4 speakers and 2 MM-10XO subwoofers. Developed in PureData, an open source, high level object programming environment, the sound design engaged gain and delay compensations on every speaker, which was crucial in recording live sounds in the space.

The two player pianos—one above, one below—were linked by two AKG 414 microphone to each other, aurally if not visually. The audio signal from the upper piano directed the responsive playing of the piano in the lower gallery. Registering each pressed key through a digital hammer within the acoustic piano, the system responded to the strength and pressure of touch. Depressing a higher note on the keyboard added speed; a lower note added slowness to create different rhythms. In effect the algorithm turned the upper piano into a rhythm keyboard (as apposed to a pitch keyboard). The pitch of every note played on the upper piano, started a rhythmical pattern which speed was set by the pitch ale, and the intensity of the played pitch added that note into the probability distribution function with a value equal to the amplitude of the played pitch, for the random choice of each note played in the rhythm. The pianos were also animated by voice from reading at the steel table and by pressure from signing the entrance visitors’ book.

STEEL TABLE
Visitors and performers contributed to the sound environment by reading concordances, singing, or reciting poetry at the microphone mounted on the steel table in Gallery B. Their voice’s rhythm, amplitude and formants were used by the system and transformed into the piano’s “handless” playing in Gallery D. It often seemed as if the voice and piano were talking together.

In addition to speaking through the table-mounted microphone, visitors operated the tilting plane in the table. This set in motion two steel balls, whose sound was picked up by four AKG c411 contact microphones, amplified, and played back into Gallery B through four floor-imbedded speakers at the foot of the Blue Black.

JUMPING BEANS
A table laid with Mexican jumping beans (Frijoles saltarines)—a seedpod through which the larva of a small moth has chewed—occupied the Mezzanine gallery. When the jumping beans were warmed by sun, they stirred in response to the intensity and presence of light and warmth. The movement inside the individual encasements made a chorused rustling, and the sound was amplified by two rode condenser microphones and sounded in the Mezzanine and Gallery B.

LP RECORDS
LP records from the St. Louis Public School Archives played in the Entrance Gallery on two record players. One was on the table with a stack of concordance newspapers; the other was on the floor directly below it. They were played simultaneously. The records featured two-part singing, short stories, public speeches, poetry, and sound effects. When not playing, the records were stacked an adjacent shelf, acting as silent invitation to sound.

SIGNATURE SHEET WITH DISKLAVIER PIANO
Upon entering the Pulitzer, viewers were invited to sign in graphite on a paper pad at the glass reception desk. The pressure of the signature registered as the “handless” playing of the Disklavier piano in Gallery D.

BELL-SHAPED SPEAKERS
Five exterior speakers mounted on the roof of the Pulitzer played to the sky—or back to the neighborhood—sound recordings from an archive of calls contributed by phone.