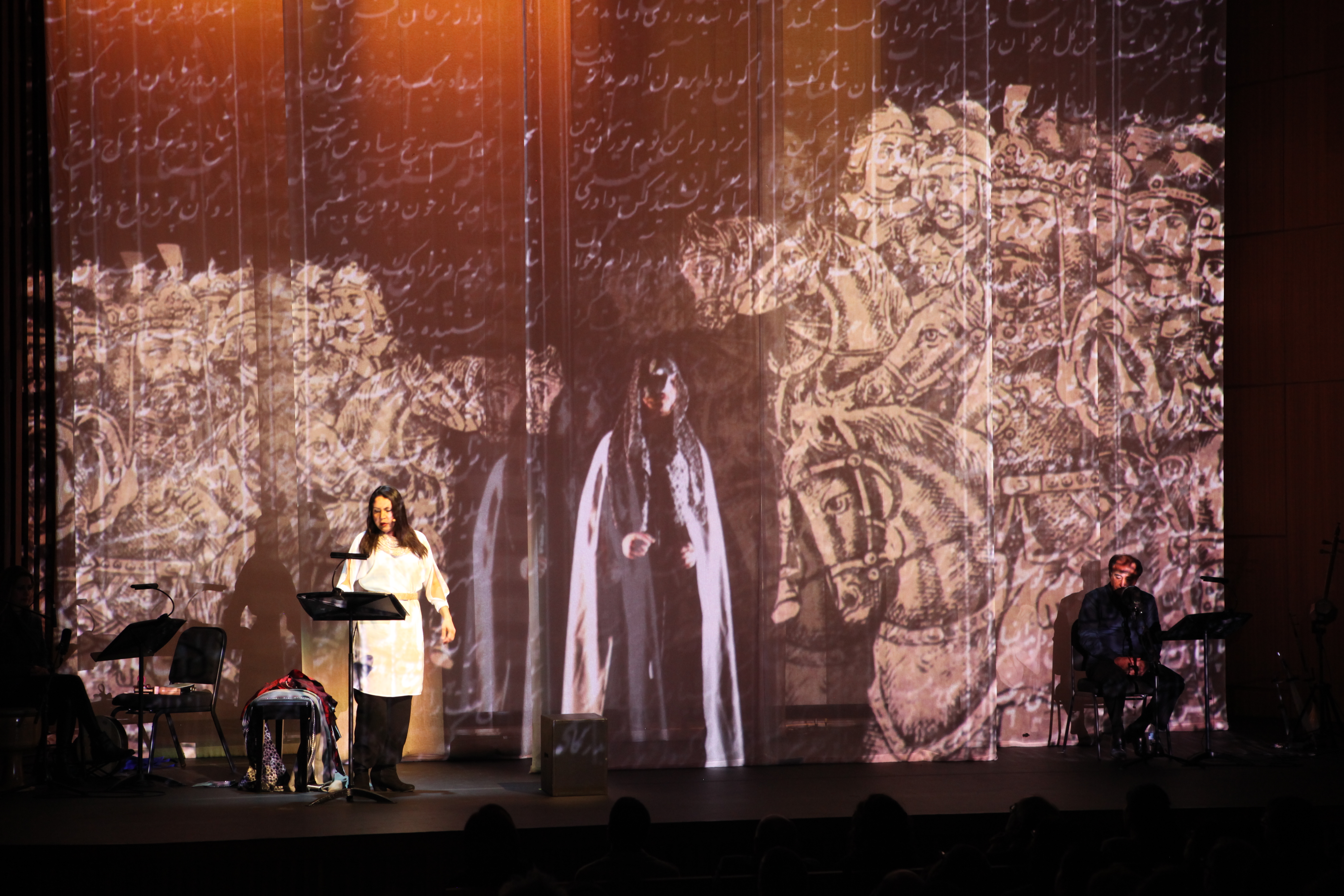 “Siavash: the Prince of Hope”  is a multi-disciplinary piece based on the story of Siavash in Shahnameh by Abul-Qasim Ferdowsi (940-1020 AD). In this production the story is told in the form of old Shahnameh-Khani (Shahnameh Reciting) and Naqali  (story-telling performances often in local coffeehouses and community venues) traditions with live music and the use of modern theatrical technologies and advanced interactive audio and video processing and control. Performers include Gordafarid (story-teller, the highly celebrated first female naqal of Iran), Siamak Shajarian (vocals, the most important Iranian vocalist in diaspora), Keyavash Nourai (Kamancheh, Setar, and Cello), and Bahareh Moghtadaie (Percussion). Set and interactive video is designed by Ian Wallace, and costumes by Danae McQueen. Siavash: the Prince of Hope” is adapted, composed and directed by Shahrokh Yadegari (internationally recognized for his interdisciplinary pieces).

The first page-to-stage production of this piece will be performed at the Aga Khan Museum in Toronto, Canada, on Dec. 5th and 6th, at 8pm. Click here for more info and tickets.

The story of Siavash is one of the oldest and most important stories of the Shahnameh. The roots of the story goes back to possibly thousands of yeas ago and the practice of the rituals for the death of Siavash can be found all around the middle Asia in various forms. The traces of this story can be found in the story of Abraham, Joseph, Jesus, Zarathustra , and the third Imam of the Shia sect of Islam, Imam Hossein.  Sufism spirituality  and Nietzsche’s Ubermensch concept also find their sources in the story of Siavash in form of personal belief and commitment to one’s own understanding of right and wrong, and thus belief and commitment to one’s own understanding of God.

Siavash is the prince of Iran, who after having defeated the enemy and coming into a very favorable agreement with the Turan’s King, Afrasiab, goes against his father’s order of ignoring the agreement and attacking Turan. To Siavash honoring an agreement is one of the most tenets of humanity even if it is regarding an enemy. Even though Siavash is aware of his tragic destiny, the knowledge does not impede him from doing what he believes is right in his own heart. The story of Siavash and his son Kaykhosrow, is the story of death and rebirth (resurrection) of humanity. It is believed that the story of Siavash is the story of earth and agriculture. This mythological relationship between human psyche and the earth is crystalized in philosophies of Omar Khayyam and later in poetical forms in the works and life of Mowlana (Rumi) and Hafez.

The social and political climates of every nation or culture is directly related to how violence is characterized, resisted, and/or justified in their value system and foreign policy. The story of Siavash has constantly shown us the extent of the damage violence inflicts on our individual and collective psyche, and reminds us of our individual responsibilities in assuring the sustainability of our political and social world.