Migration (2003)
A work b Shahrokh Yadegari 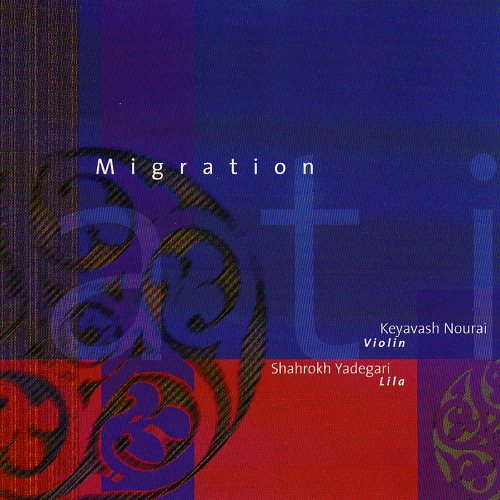 Published on LilaSound Productions. Catalog No. 501

For violin and electronics, Migratroin is a structured improvisation piece. The piece starts in Dastgah Esfahan (a Persian mode similar to harmonic minor mode with 7th degree flatted a quarter tone), and moves to the more dynamic Dastgah Chahargah (similar to major mode with 2nd and 6th degrees flatted a quarter tone) and it finally ends if Esfahan. Computer music is often thought to have a very specific sound which is normally attributed to the western musical traditions. The computer is usually perceived as a Western instrument. Thus, computer music has often been produced based on Western ideas. With the prevalence of such contexts in how computer music instruments and techniques are developed, it is a very difficult task for electronic/computer music to stay in the realm of a certain tradition without misappropriating some aspect of that tradition within the context of the Western frame of mind. The goal in this piece is to use the computer to accompany and create Persian traditional music but not to diverge substantially from the roots of this music. The language used for the improvisation in this piece is the same language that musicians would use in a traditional setting; thus, the acoustic performer is not requested to play any differently than how one would play in a traditional setting.

Listen to the interview with Marco Werman on
BBC/PRI’s “The World”, December 11, 2006

Available at: Amazon and

Garden of Lila (an excerpt) from Shahrokh Yadegari on Vimeo.

And by Ellie Leonhardt

Migration from Ellie Leonhardt on Vimeo.

Modern dance choreographed by Ellie Leonhardt with music by Shahrokh Yadegari. Performed by students at the University of North Texas at the annual Faculty Dance Concert, February 22nd, 2009.