The Scarlet Stone is a multidisciplinary and collaborative music/dance/animation work told in the language of dance-theatre. The piece is based on the last work of Siavash Kasrai, Moher-ye Sorkh (Scarlet Stone), and it uses the modern rendition of the ancient Persian mythology by Kasrai to portray the current struggle of the people of Iran, especially those of the youth and women, in their brave quest for freedom and democracy. As artists of the Iranian diaspora, our goal is to make this project directly relevant to the current political and social climate of Iran. The project will also include a number of colloquiums, which will involve key scholars to discuss the history of Iran in the past 50 years.

The Scarlet Stone movie documentation of the Royce Hall performance will be streamed for free for one month by Tirgan staring October 1st through November 30tt, 2021

Vote for the movie on IMDb 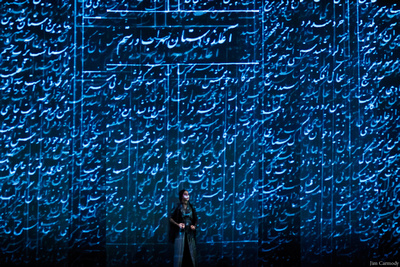 Approach to the Production:

This project has been developed around the production of the last poem of Siavash Kasrai, Mohre-ye Sorkh (Scarlet Stone). The main point of Kasrai in this work is to show the value of wisdom over fascination and bring to our attention the need for all Iranians to take responsibility for their cultural development of the past 50 years. With his critical view, Kasrai also offers strength and hope. We believe much of what he addresses in his work, both in terms of societal problems and solutions. are alive in the current social and political movements in Iran. For many years, the only option for defining a structural basis for a social or political movement was either leaning towards the left or the right. Kasrai, having come from the leftist tradition and having been the victim of the disillusionments which followed the left movement in Iran, proudly writes a strongly hopeful poem for facing the problems which have plagued our time. We feel the current movements in Iran, where all sections of people have come together to voice their desire for peaceful reform and freedom, are a living example of what Kasrai has presented in this work.

Similar to the artistic form of Kasrai’s poem, we intend to stage the work with modern aesthetics and a deep commitment to the traditional and ancient values of Persian arts. Advanced interactive technology will be used for production and projection/diffusion of video and sound, which will help the integration of the multiple disciplines used in this project. The production will have strong interactive elements in regards to its use of technology, which in the end will serve the integration of the social and cultural narrative of the story with traditional sensitivities and within a modern dance-theatre production process.

Our goal is to produce The Scarlet Stone in a way that will become a catalyst for communication among Iranians, Iranian-Americans, and all those interested and invested in the evolution of the political and social life in Iran. We aim to make the production of a high caliber in order to do justice to the work of Kasrai, the art of poetry in Iran, and the deep philosophy found in the ancient mythology of Iran. The integration of poetry and philosophy is a difficult task for those who are grounded in Western philosophical traditions. This matter is at the heart of the old and new poetry coming out of Iran. The production of The Scarlet Stone will be accompanied by several colloquiums involving key scholars of Persian Literature and history. Our intention with these diverse events is to foster communication among the many sectors of the Iranian-American communities in the greater metropolitan areas in the United States.

A Narrative of the Production:

The Scarlet Stone is a new multidisciplinary and collaborative music/dance/animation work performed in a special environment accommodating the live interaction between music, real-time video animation, and a group of world class dancers. Told in the language of dance-theatre, we will depict the story of `Sohrab’ (the symbol for justice and equality in ancient Persian mythology) in a modern form, who in “Shahnameh” is killed by his father `Rostam’ (the symbol of paternalistic power).

Rostam and Sohrab are the two main protagonists of `Shahnameh’. Sohrab is the love child of Rostam (the immortal hero of Iran) and Tahmineh (the princess of a neighboring country) who actively and proudly pursued Rostam, and believed that their union and offspring (Sohrab) would bring peace and prosperity to the region. “Shahnameh” ends with the tragic death of Sohrab by Rostam (in ignorance), and the conquest of Persia by the Arabs, which Ferdowsi calls the “arrival the army of darkness”.

Based on the “Shahnameh”, the poem “Mohreye Sorkh“, by Siavash Kasrai, is set at the last moment of the life of Sohrab. Kasrai was one of the most important and eloquent contemporary poets of Iran. Kasrai was persecuted before the 1979 revolution by the Shah’s regime, and after the revolution by the Islamic Republic of Iran. Kasrai’s life work has been a hopeful message for Iran and the proud Persian culture. He has written a number of works based on the mythology found in Shahnameh. In The Scarlet Stone, Sohrab (the mythological character) confronts the author of “Shahnameh”, Ferdowsi, for the reason of his tragic death and the meaning (or meaninglessness) of his futile quest for peace and justice. Kasrai finished this work in 1990 in exile, when the Islamic government had already established its successful autocratic and oppressive rule over the people of Iran by mass terrors of intellectuals, artists, and nationalists. One finds one of the most hopeful and meaningful messages regarding the recent struggles of people of Iran in the answer that Ferdowsi gives to Sohrab in The Scarlet Stone, that: “Your fight is not only local, but a global struggle against injustice”; “when you began your road to be a hero, you should not expect the path to be easy”; “you may think you are dying in the book, but your name will forever be the light and the symbol for those fighting for justice and freedom.”

We believe today’s generation of the youth and women in Iran are the generation of the `Shorab’s and ‘Tahmineh’s, who bravely, passionately, and peacefully have been struggling against the oppressive Islamic regime of Iran. We find that the recent movement in Iran is a fundamentally new form of peaceful approach to political dissent, where actions are not fed by partisan politics, but by grass root social necessities. The people of Iran awed the world with their bravery, unity, and non-violent resistance towards autocracy. This was a leaderless movement where every person became a leader and a hero.

All of the artists on this project are committed to the expression of traditional values through modern artistic languages. As such, we aim to tell the story of The Scarlet Stone by combining Persian traditional music and dance with modern aesthetics using the state-the-arts audio/visual interactive technologies.